If you haven’t heard of the craze of plogging yet then you can learn about it in our previous post WTH is Plogging? which was posted to teach people about a Plogging & Yoga event hosted by Kara Bemis Yoga the day before Earth Day. That same week, Kara’s twin sister, Kayla, attended a Plogging event in DC. This is a special joint review of those two events co-authored by Kara & Kayla, and if this post inspires you and you’d like to stand up against single use plastic for the ocean, then keep your eyes out for events taking place in early June for World’s Oceans Day, June 8th, such as March for the Oceans in DC on June 9th.

This event was promoted a lot leading up to the day of the event and due to the fact that it was free, was anticipated to have a number of guests. Unfortunately, for whatever reason, the event was under-attended. Initially this was a sad slap in the face, but two people did show and those are two more people who now know more about plastic pollution, why it’s a problem locally and globally, and how to change habits.

The most important aspect of this event was the 5 Gyres plastic talk, followed by the physical act of collecting litter, and lastly the yoga. The talk was rooted in a 5 Gyres power point that included visceral slides and facts and statistics on the importance of the oceans and the detriment of plastic. Although there were only three listeners to this talk (my husband made it to the event just in time) it was a positive experience to give my first talk on plastic.

The four of us collected an impressive amount of litter in a small radius near the Chadakoin river in downtown Jamestown, NY. It was a sunny, warm day so walking and talking while picking up garbage was an enjoyable task, seeing how much we gathered made it even more worth it.

The yoga itself was initially planned to be very beginner friendly as I was expecting yoga newbies to attend, but since all of the participants were returning students the yoga I taught was intermediate. The class was nature based including animal and insect poses. Of course vrksasana/tree played a part.

Moving forward from this event I plan to host more Plogging and Yoga events and offer the plastic talk to any group or individual who wants to hear it. Science classes, environmental groups, strangers on the street, anyone.

The event that I attended was presented by the DC Parks and Recreation (such an under appreciated governmental resource!) and a local gym called VIDA Fitness (VIDA) located on U Street. On the morning o Earth Day registered participants met at a recreational facility in my Petworth neighborhood. Attendance was high, nearly 40 people, which is not surprising considering that DC is the second healthiest city in America. Minneapolis stole our first place stance in 2017, hence the increased DC Parks and Rec events throughout the capital – we can win it back!

To begin, our hosts, VIDA’s Membership Consultant and a representative from DC Parks and Rec, gave an overview of the day, offered a guided stretching routine and gave an informative talk about litter control in DC. Most memorably, we practiced squatting for healthy trash pick up to preserve our ankles, knees, and backs before taking off. The DC government representative spoke for a new initiative at most DC park facilities, in which plastic trash and plastic recycling bags are available for year round plogging enthusiasts to utilize.

Each attendee was furnished with bags and plastic gloves, including a few clear recycling bags, which I was able to score. My boyfriend and I took the mission to heart and split a pair of the plastic cleaning gloves, wearing a single glove on our right hands for trash pick up and keeping our left hands air-accessible while holding our bags. The group ran, jogged or walked through our predetermined path grabbing litter along the two and half mile route. There was even some media coverage at one spot, check out the video here.

In addition to the fresh air, meaningful community/neighborly time, environmental impact, health benefits and an increased feeling of well-being, I truly felt that our group was an inspiring view for those driving by or viewing us from their stoop. It was fun to feel uplifted by working towards a common goal with other environmental Washingtonians, and to see others smiling at our noble cause. Perhaps we influenced those spectators to do their share by snagging a few pieces of trash on their morning jogs or commutes. 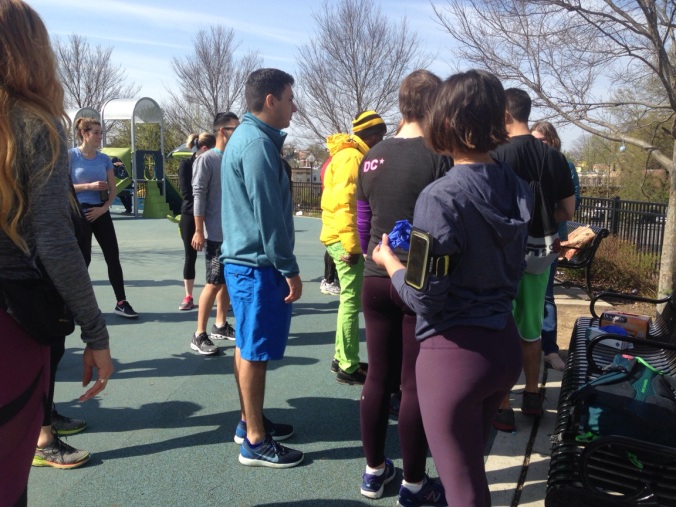 It was a really enjoyable way to spend a sunny day outside and honor the planet. I hope to see other similar events pop up in my lovely city over the coming months. In the mean time, I encourage everyone to independently do their part by plogging, decreasing their plastic consumption and trash creation and especially by participating in March for the Ocean (M40) on June 9, 2018, in celebration of World Oceans Day. Visit marchfortheocean.org  to find a rally near you, or for information on donating to help in protecting our planet and in efforts to eliminate plastic use.