A couple of weeks ago I wrote an introductory post about natural building, explaining briefly about what it is. As mentioned in that post, I have been very fortunate to have had multiple opportunities of traveling to multiple countries to learn more about natural building. One trip took me to Re-Green in Greece where I stayed, learned, and laughed with some of the most amazing people who I’ve ever met. While there I also had the marvelous opportunity to teach yoga in the stunning Maloca, which is the magnificent meeting room at Re-Green. The Maloca, is a round structure that was built by hand using multiple natural building techniques and it derives its name from the Amazon where a maloca is a long house used for communal meetings.

Not only is the Maloca a place of beauty and a space used for yoga, but it is also an exhibition of multiple natural building techniques. Each wall is built using a different technique and as is common in natural built structures, each wall has its own truth window. Truth windows are cute little peeks into what’s underneath the plaster. It’s a way for owners and builders to display the technique used to build the space. Generally there are small shutters or doors that you open to find Plexiglas which shows what lies behind and between the interior and exterior walls. The Maloca has exactly this on each unique wall, but without a door or shutter, it’s simply the Plexiglass displaying what’s really there.

One wall shows straw bale, another rammed earth, there’s earthen bags, and straw clay, plus cord wood,  and adobe brick. That is six examples of natural building in one 100 sq meter beauty of a building. The quite literal icing on the cake is the masterfully constructed reciprocal roof, pictured as the feature image and below (it’s so beautiful I had to show it twice.) 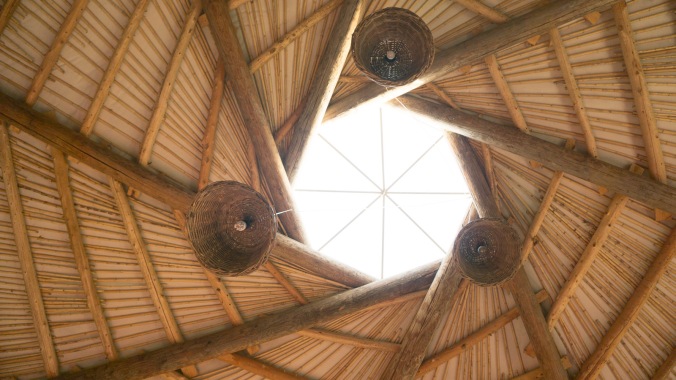 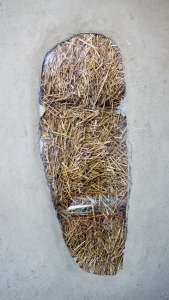 Straw Bail houses and buildings are becoming somewhat more known in the U.S. and the rest of the globe. They are as they sound, houses built of straw bales – Three Little Pigs style, I’m sure one of them made a house out of straw! Well these walls won’t be blown down by a nasty wolf nor a nasty north wind. As you may have guessed, the walls are thick, as thick as a straw bail as a matter of fact! Now of course there’s more to it than stacking bails on top of each other into the shape of a house. To finish the walls earthen plaster (mud) is applied to the exterior and interior. This keeps the critters out.

Straw clay is likewise made from straw, but this time the bails are deconstructed and the straw is blended right into the mud-clay mix, either by hand, taking handfuls of loose straw and drenching it in the mud mix, or by mixing it with machinery. A structure must be built first in order to hold the straw-dipped material inside. The wood is put together so that there is a hollow space in the middle where the straw clay will be packed, and it must be packed tightly or hollow spaces will be left, where those same nasty critters could burrow in through the tiniest of holes in the external wall; trust me, you don’t want squirrel pee soaking in to your living room wall! Pack it tight!

A rammed earth wall is a show piece of a natural home. Rammed earth is layers of soil and clay rammed down hard so that it becomes sturdy and permanent. Did you ever go to a state fair and fill a glass jar or vase with different colors of sand through a funnel to make an elementary master piece? Well, that’s pretty much what rammed earth looks like. Layers of earth-tones on top of each other. These walls take a lot of time and brawny muscles, so an entire house is not likely to have all of its walls made like this, but an island in a kitchen or a wall near a fire-place could be examples of ways to use rammed earth as show pieces. Structural and beautiful all in one.

Central, under the window, is rammed earth, shame that it’s not a closer shot as you miss the beauty. To the left is clay brick.

Clay bricks are commonly known in the U.S. as adobe. These types of buildings are, or were, prevalent in the south-western United States. These are bricks made from clay that are molded or formed and then dried in the sun. they then are mortared together to form walls. Unlike hobbit-house straw bale houses, which are more organic in shape and can look like they’ve come straight out of Middle-Earth; adobe walls tend to be straighter and more uniform. Adobe is also good for building more complicated forms such as arches.

Imagine a big tree that’s been timbered and the logger starts to cut the tree like slices of bread creating great big circular remnants of the tree. Now imagine that those pieces of the tree are inserted into a wall, that’s what cord wood looks like, although of course the cord wood isn’t just inserted into the wall, it is inlaid slowly as the wall is built. Cord wood structures are quaint and very reminiscent of the nature from which the wood has been derived. One thing to know about building with pieces of a tree is that wood moves, breathes, and contracts with the weather, so gaps may form if the malleability of the wood is not kept in mind while building. You can see an example of a cord wood wall behind the gang of us after a morning yoga class at Re-Green, a superb backdrop for any photo. 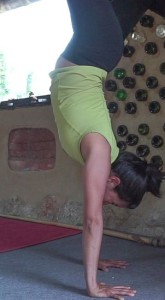 Earth bags just behind this gal doing a handstand.

Earth bags are large bags filled with soil then piled on top of each other to build a wall. This is a form of natural building that is quick and relatively easy, although of course, some building knowledge is required. The gags are filled with earth that contains some amount of clay or another substance such as volcanic rock. This is a good technique to use if your build site does not contain much clay, as less is needed. Of course the major elephant in the room is the bag which the earth fills. The bags are as most bags are in our modern world – plastic. Now you know how I detest plastic bags, so I would not choose to build with earth bags if I could build anoterh way, but I understand that using earth bags is the lesser of the two evils when the alternative is to use conventional building supplies that have more chemicals and are likely not produced localy.

And there you have it, the techniques used to build the sacred space that is the Maloca at Re-Green, Greece. There is a lot more to say about each and all of these styles of natural building. For now I’ll let you day-dream over your little hobbit house, a great day dream to have as winter surrounds us. Just picture sitting by the wood stove, wrapped in a blanket (or not, these houses are energy efficient, but the blanket helps the vision of coziness I’m going for here,) sipping tea, reading a book with your dog at your feet inside the natural house that you built with your own hands. What a dream, and it’s a dream that becomes more and more realistic the more you learn about natural building. I can almost guarantee that once you get your hands in the dirt, you’ll be back for more, just as I was.

I hope that these photos of the Maloca have directed your day-dream in the right direction. Keep following this blog for more information on natural building and other things natural and yoga.