This has been the longest gap between posts for me since karabemisyoga was started back in 2014. I have been busy relocating (temporarily or permanently – )not quite sure) back into American life after living abroad for 4+ years. My trip in India and through Europe has sadly come to an end, but it has inspired posts such as this one, a comparison of two popular working holiday/work exchange networks. There will be more posts by me inspired by my travels, my practice, and my “new” life here in the U.S. Now for the article:

Why Help-X is Better Than Wwoofing

A previous post written was about Help-X, a network for hosts and helpers to find each other world-wide; hosts find helpers to do all sorts of work on their land and helpers find hosts in all corners of the globe to stay with and learn from while on their working holiday. As mentioned in that article, there are two other popular online networks out there: Wwoof and Workaway. You can have a look through all three and make your own decision, but having used both Help-X and Wwoof before (I’ve never used Workaway but met volunteers that have with success) my preference is Help-X. Here’s how Help-X and Wwoof compare. 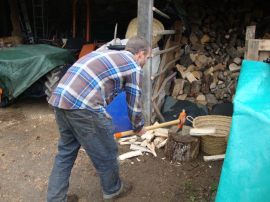 Wwoofing is a similar network to Help-X and is something that my boyfriend and I were considering doing back in 2011 until we opted for Help-X, a decision that I very happy to have made. Others are equally happy with Workaway. Hosts that I have stayed with recently have had profiles on all three networks, so odds are that you won’t miss out whichever service you choose, but I would argue that you will miss out if you go with Wwoof if having a variety of hosts in countries all over the world is what you’re looking for.

By no means do I  wish to bash the organization or write with hate. I have had only the one negative interaction in the past and can’t use that to judge other international Wwoof networks not associated with the Korean network. To clarify, this piece is to help travelers out there making a decision about which network to go with and I hope that it helps in that decision.

For more on the subject, have a look at this article by our very own Amy Steele, written about Voluntourism for Busan HAPS magazine’s June 2016 issue.