It’s only mid-January, and all ready there have been some big, positive announcements around the globe regarding decreasing the use of single use plastic and climate change in general. With natural disasters becoming more and more common and devastating (this past year in the U.S. alone was a record setting and expensive year due to natural disasters – hurricanes and wild fires) legislation and commitment by cities and governments is some positive news that is welcome to start out 2018.

The four big news stories that I have seen in the new year came from Montreal, New York City,  China, and England.

Montreal has banned plastic bags. The ban went into effect on January 1, 2018 with penalties to shops who do not follow the law going into effect on June 5, 2018. I visited Quebec just before learning about this ban for a short trip between the Christmas and New Year holidays, while there I noticed that all stores charged 5 cents for each plastic bag, but local Québécois  that I asked were unsure if this charge was local, province wide, or in all of Canada. When I returned home I tried to do some research and in google searching I found the article about the plastic bag ban in Montreal.

In my opinion, plastic bags are utterly useless; they are not strong, therefore they break easily and most people toss them straight into the garbage they live their life cycle of just one use between the store, the car, and the cupboard. People casually toss them straight into their garbage, most people that I have witnessed in my area do not even recycle them. Some stores have recycle bins at their entryway in which to collect used plastic bags for recycling, but they have to be clean and dry, and of course people would have to collect them and remember to bring them with them to the store to drop off, and not all stores have these containers, so it is not convenient.

Rather than go through the process of recycling plastic bags or pollute the oceans by throwing plastic bags in the garbage, why not buy a couple of reusable bags from your local grocery store and use and reuse those for shopping? I wish more major cities would set a standard of banning plastic bags which would encourage states/provinces and countries to do the same. It is a big shift to make, but I am so glad that Montreal is leading the way in doing so in 2018, really proving that they are French Canadian, in the fact that France banned plastic bags as a country in the summer of 2016.

A couple of weeks after Montreal’s ban went into effect, New York City announced that it will be divesting from fossil fuels in the city’s pension funds and that it will begin the process of suing five large oil companies for the negative impacts that their actions have had resulting in climate change and damage to the city – hurricane Sandy, for example. This is big news, especially since it completely contradicts the view of the president, who would rather invest in coal than renewables and whom does not even believe in climate change. Thankfully, some cities and states have vowed to take action against the president’s withdrawal from the Paris Agreement; Mayors and governors around the Unite States took a stance to pass their own laws that were in accordance with the Paris Agreement after Mr. Trump pulled the United States out to show that US Americans do believe that climate change is a real and imminent threat and that as individual cities and states they will not sit back and do nothing.

Possibly the biggest news that started this year off in terms of plastic pollution was that China has banned the import of other countries’ waste as of January 1, 2018.  A lot of people are unaware, but much of the recycling collected in the U.S. and Europe does not get processed in the countries where it is collected. About a third of the waste produced in the U.S. is exported, sent to other countries for them to process or bury. Much of it gets sent to China, but no longer. That’s a lot of waste that has nowhere to go now. This news is good in that some of the waste that was exported on container ships would blow off and end up in the ocean creating ocean pollution. But now what will happen to waste at home in the U.S.? Of course the answer should be that the U.S. will have to handle our own waste, and we should, and by facing the waste problem straight on, would give more thought to using less packaging and creating less waste. Likely however, it will get sent to another country because the U.S. does not have the facilities to handle it all. Another negative effect may be that recycling centers say that they can no longer manage recycling waste and therefore may put them instead in to landfills (see the hyperlink earlier in this paragraph.) 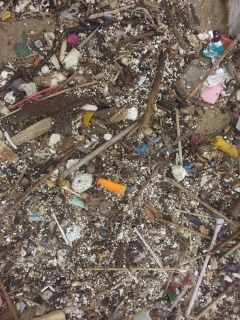 The final big news that has come out since the start of the new year came from Teresa May just this past week. The PM of England declared that England’s newest environmental plan includes a goal of stopping all UK plastic waste by 2042. That is a few steps forward of Montreal’s plastic bag ban, but as some critics have said, it is too far in the future and her plan lacks clear guidelines, but it is a good start to move the conversation towards reducing and eliminating plastic waste.

There has been talk that many UK politicians are getting behind environmental movements due to the Blue Planet II series with Sir David Attenborough. The series is beautifully made, awe inspiring, and full of fascinating information. The fact that a TV series can educate so many worldwide on the sate of the oceans and the wildlife that habitats them is better still if it moves politicians into action.

Although the devastating, recent mudslides in California along with the multiple natural disasters of last year weight heavy on all of our hearts, it is a small comfort to know that governments around the world are beginning to make changes to combat our negative impact on our planet. As information becomes more widespread and people demand change by their leaders, there is hope that governments all over will pass similar laws and will overpower the attempts of some politicians (ahem, Mr. Trump) to take us back in time with environmental regulations. The future looks bright, albeit with a lot of hard work in the process.