Introducing Mindy Sisco, yoga teacher extraordinaire, this first post, Yoga Butts, is a perfect post to have in mid-January, a time when we’re tempted to body-hate ourselves after weeks of holiday parties and Resolutions that aren’t always fulfilled. In this writing, Mindy gets personal and insightful about yoga and it’s back-end-benefits, that aren’t for show, but for strength and empowerment.

Many have lusted after it. Lululemon made millions off of it. It has its own entry in Urban Dictionary. The holy grail. The Quan. The Yoga Butt. Against all my scoffing, it turns out to be just as powerful as all the hype.

But(t) before going further, let’s go back. Practicing outside of a Western context, I’m new to the concept having only heard it uttered by a non-yogi friend last summer in Montreal. A Google search of “where did yoga butt start” led me to a string of articles about struggles with body image. This is particularly topical as of late in Korea as pop star, JYP, just released a song about butts. I’ll let you google that on your own. To even greater disgust (I’m looking at your Bill Maher!), afterwards he was chastised, not for his objectifying message, but that the butts he chose to lust after weren’t big enough.  Korea is first in the world for number of cosmetic procedures, a whopping 1/5 have had some sort of augmentation. In a place of immense competition and commodification, Tina Fey’s sentiment couldn’t ring more true.

I’m not immune from the sexualization of yoga here in Korea but I do have the luxury of being sheltered from it. This is based purely on limited passive exposure to media in my native language. I don’t pick up on ads playing in restaurants or images in print the same as I would back in the States. I’m lucky and thankful to be in these circumstances, this bubble. Beyond the bubble, it was yoga that gave me back some ownership of my body. It wasn’t about how it looked, it was about what my body could become capable of. Nobody really looks cool splaying their toes likes a monkey, but mine definitely outstretch most. And I love them. They are hands (feet?) down some of the most dexterous toes in the game.

I decided: I’m reclaiming it. The Yoga Butt is real, and it’s awesome.  When I talk “yoga butt,” I’m going past an ornamental accoutrement made to parade around overpriced pants. Sure, let that be the bait to get you there. I’m talking ass-blasting power that keeps your sacrum stable and you balancing on one leg like King Flamingo. I venture to say that a majority of people don’t walk into a studio seeking enlightenment. What keeps you there is feeling like a badass doing something in the skin you’re in – not 10lbs lighter you, not two inches taller you, not 20 years ago you, not fatter ass you – YOU. Exactly as you are, exactly in that specific moment.

To the undiscerning eye (I’m looking at you, Bill Maher!) my butt is more pancake that apple. If you ever catch me out on a Saturday night, ask me about the time I met Sir Mix-a-Lot doing a radio show. Suffice it to say I was vapor in that studio. Dumps like a truck? No. Yoga butt? Like it’s my job. Honestly, I like it. I feel kind of like a superhero- packing heat undercover. 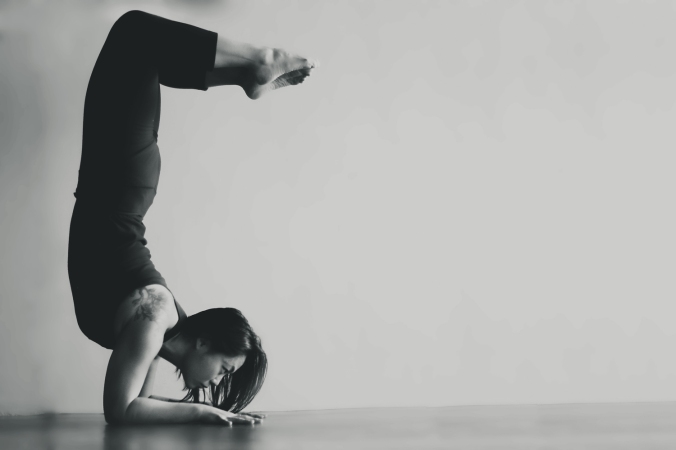 For a big chunk of my time with yoga, both as a teacher and student, I avoided standing balances. I like feeling fire as long as I can move with it. Standing balances were like being forced to stand still in the middle of a furnace while being melted alive. First coming to yoga as a means to work out, I expected to move, not stand still. It took me 12 years to really gain an appreciation for this part of the practice.

The science: body imbalances between the front and back body.

The problem most common across the board is a world full of “lazy butts.” Office life and desk warming leaves us sitting. The gluteal muscles aren’t put to use and if you don’t use it, you lose it.  Without the support of strong glutes, the psoas ends up working overtime to stabilize the pelvis. Hip flexion muscles, the psoas in particular, stay in a shortened position while sitting. This causes tightness over time and can change the default angle of the pelvis. A “neutral” pelvis should tilt slightly forward with the tailbone pointing down. This is why so many people struggle to sit upright on the floor. This imbalance is the start of a world of hurt: knee pain, back pain, eventually spiraling up the length of the spine to affect the shoulders and neck. Time to put that butt to work!

Click here to see the original posting of “Yoga Butts” by Mindy which includes a short sequence that will burn your glutes so good. For more information on the author, go to the About section of the blog to read Mindy’s bio.

Progress in the #garden this morning, borage and sunflowers looking healthy, these are the guys I chanced by putting in early and it is paying off so far. I also planted some #organicseeds for continual food all summer. 🌱 👍 🌞 #permaculture #homegarden #growfoodnotlawns #organicgardening #jtny

Acro Yoga Busan Change Habits Clothing Swap Community Conscious consumerism DIY Earth Day Ego Event Hosting Fashion Health Karma Yoga Plastic Free July Say No to Fast Fashion Say No to Single Use Plastics Sustainability Travel Upcycle Use Less Plastic Yoga Yoga Event Planning Yoga on and off the mat Yoga Studio Review Yoga Teacher
Progress in the #garden this morning, borage and sunflowers looking healthy, these are the guys I chanced by putting in early and it is paying off so far. I also planted some #organicseeds for continual food all summer. 🌱 👍 🌞 #permaculture #homegarden #growfoodnotlawns #organicgardening #jtny
%d bloggers like this: