Wednesday, June 21st is International Day of Yoga, or at least it has been since the prime minister of India  and the United Nations General Assembly declared it so three years ago. On that first day of International Day of Yoga in 2015, thousands of people practiced yoga in hundreds of different cities in many different countries around the world and did so again in 2016. Just the same, there will be thousands of celebrations around the world this year, and there may be one near you.

International Day of Yoga is a day in which people are encouraged to practice on their own or find an event to attend, the day is a day to take time to practice for health and well-being, and it is also the summer solstice – the longest day of the year in the northern hemisphere, which makes it a great day to practice outside in nature.

This internationally celebrated day, as opposed to other silly national and international days (say National Donut Day, sorry to throw a dash of negativity in here, but I do find it slightly infuriating that more people recognized National Donut day as compared to World Ocean’s Day  here where I am in the U.S. and nobody I know locally participated in National Ride Your Bike to Work Day, but there’s hope for next year and chance of redemption with International Day of Yoga) is a day that promotes health and well-being in yoga studios, communities, and schools. The practice of yoga is beneficial for the physical and mental body. Yoga strengthens muscles and increases flexibility in muscles and joints. Yoga is a safe form of physical activity for all ages when taught and practiced with awareness. When meditation and breath practice is included, yoga has the added benefit of calming the nervous system and mind and relaxing away tension. This is a day that encourages all of this and on which you can likely find an event nearby to practice at, in my opinion this is an international day worth recognizing and participating in.

Most events are free or donation based. Many are held in front of monumental and historical landmarks such as the Capital Building in D.C. and the Eiffel Tower in Paris (shown below). For the past two years I have had the good fortune of teaching at and being apart of events in Busan, South Korea, my old expat-hometown. I have since relocated back to the United States and am excited to be bringing an International Day of Yoga celebration to Jamestown, New York, it’s first I believe – very exciting.

Our event in Jamestown, which is being hosted by Sun Moon Yoga, the beautiful, newly-relocated studio that I have had the pleasure of teaching at for the past few months, and will be held in the second story court yard of the historical building where the studio now resides. The two-hour session will consist of 108 sun salutations, also known as a yoga mala. There will be at least three teachers teaching a wide array of styles of sun salutations to students who are encouraged to rest in child’s pose or even step off of their mats for a rest and refuel with provided refreshments. Jumping into a practice of 108 sun salutations is a major increase to students who may only be used to doing 3-6 salutations in a class, or may have never even done them, so taking rests are highly recommended. International Day of Yoga is by no means a day only for those who practice yoga regularly, but rather it is a day for newcomers to try yoga, maybe for the first time, so that they too can reap the benefits of this ancient science. 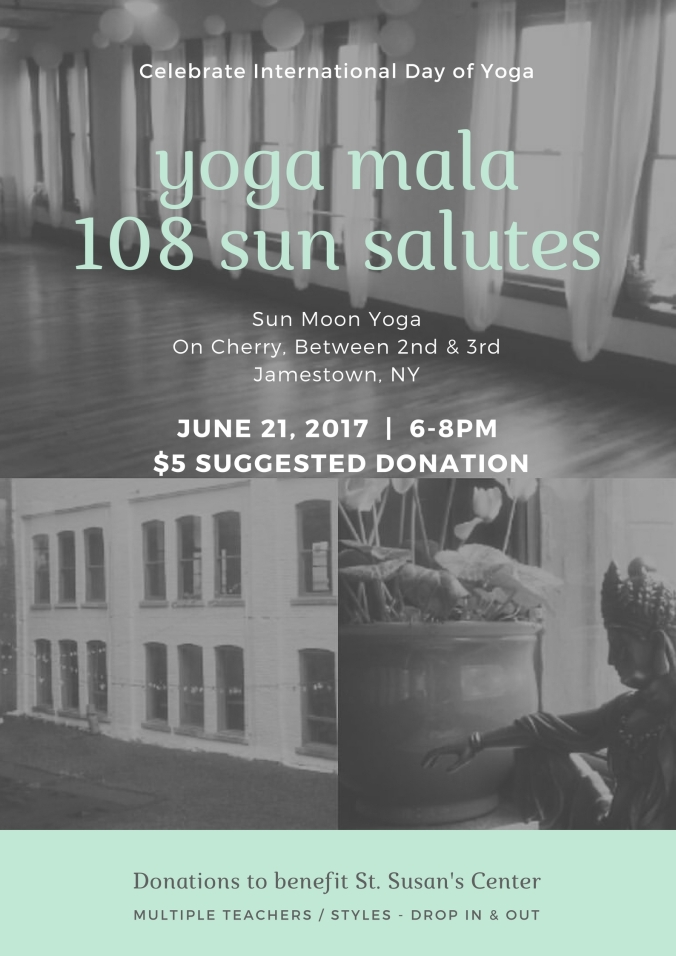 To find an event near you, which may be occurring this coming weekend, June 17-18th or the following weekend of June 24-25th, simply google an event in your city, ask your neighborhood yoga studio, or look for events on Facebook. To attend the event in Jamestown, arrive to the Pearl City Arts Building located on Cherry Street between 2nd and 3rd a little before 6pm to set up. The event in Jamestown has a suggested donation price of $5 or whatever you can give (if money is tight for you at the moment, please come regardless and practice for yourself and the community, donations are suggested, but not required) which will benefit Saint Susan’s Center in Jamestown, a local soup kitchen that provides meals to those in need.