Yoga workshops, can’t get enough. Workshops are more than classes, they’re longer and they’re for learning and generally they cost a fair bit more than a normal drop in class, but not the Beginner’s Workshop at Yoga Roots in Cleveland Heights, Ohio. In fact, their Beginner’s Workshop is totally free, but it’s still two hours long. I know, I couldn’t believe it either, so I checked it out.

I admit that it might sound odd that a trained yoga teacher would attend a workshop for beginners, but I went with a friend and I enjoy taking beginner’s classes sometimes because, guess what – I teach beginners! Attending beginner’s classes is a good opportunity for me to witness and hear how other teachers communicate effective teaching to their students. This workshop was no different and it was really inspiring as a teacher to attend. 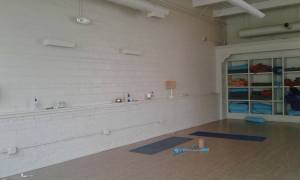 The studio space at Yoga Roots is pretty cool. It has an industrial feel with a high ceiling and exposed heating units. There’s a wall of props and a nice floor space to practice on (it’s heated, too – must feel amazing in winter.) My friend and I walked in somewhat late so we took spaces up front right next to the teacher. The room was packed full of at least 30 students. The teacher settled us all in and we began gently, after she explained how when she began yoga years ago that she had injured herself by pushing herself too far beyond her physical abilities, and therefore she enjoys teaching beginning workshops so that she can teach others to avoid doing the same thing to their bodies. I very much appreciated her openness and honesty to a roomful of mostly strangers, who likely had the same emotions of the ego as she had as a beginner. By sharing her intimidating experience as a beginner the teacher broke the ice and brought her down to the level of of everyone else in the room.

The workshop that continued from her introduction was similar to a typical vinyasa class, but was broken down into pieces, first teaching a vinyasa itself bit-by-bit and then standing poses that are common posses in classes at Yoga Roots. I have not attended a general class at Yoga Roots, but I gather from things said by the teacher that a typical vinyasa class consists of little breakdown of poses and is taught more as a guided vinyasa sequence, which are great for students who know what the heck the difference is between Warrior I and Warrior II, but very intimidating (and not necessarily safe) for beginners.

That is where the Beginner’s Workshop comes in. It is a long class where beginners can feel comfortable in a room full of other students that practice at their level and where basics are broken down and taught to them. It’s Yoga 101. Then, when they are comfortable and ready, they can make the leap into other classes on the schedule at Yoga Roots, and there are a lot, classes at time slots at all times of the day, seven days a week.

The best part, in my opinion, of the Beginner’s Workshop was that it was Q & A. Students were encouraged by the teacher to ask questions about poses if any arose and once one student asked a question, many followed. Some questions were personal, such as about a previously acquired injury and how to perform a posture, which displays how special this event was, that a student could ask a trained and qualified teacher a very specific and personal question, not common in all yoga classes and certainly not while practicing with YouTube. By asking questions students will have gained confidence in areas of uncertainty so that they could then go into a class at Yoga Roots feeling sure of themselves. At the end of the class they offered everyone who attended a discount if they signed up for a membership, another, and happily surprising bonus; unfortunately, I don’t live in the area.

It would make anyone happy to enter this nestled studio. Initially it was difficult for my friend and I to find, but a guy in the neighborhood helped us out (it’s down a driveway right next to the hair salon.) When you enter the studio there’s a counter to sign in at and merchandise to browse if you’re on top of your game and arrive early. Remove shoes upon entrance and sign in. There’s a bathroom and separate changing room as well as cubbies to keep your personal items. A special event happening while we were there that I was told about after the workshop was a yoga challenge and it wasn’t one of those “do an impossibly challenging pose in your cutest Lululemon and post it on Instagram” type of challenges, it was an actual challenge. Students earned gifts for attending classes. The first mark to make got you a mug then a T-shirt and finally if you attended 30 classes in the month time frame of the challenge then you received a gift card to the studio. The amount of participants was impressive and the fact that they were improving their well-being and being a bigger part of their yoga studio community by attending more frequently were secondary bonuses beyond the gifts. 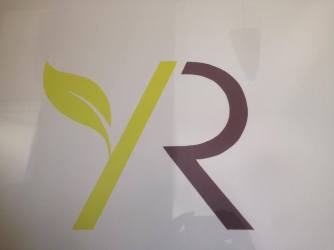 To wrap up, if you live in the Cleveland area and are looking for a great studio then try Yoga Roots. If you are a beginner then get to their next Beginner’s Workshop which happens monthly, except for in the summer, check their website for exact dates.