The holiday seasons is not only fast approaching, it is on top of us. As I write this, it is December 20th, so Christmas is just five days away for many in the west and those all around the world who celebrate the Christmas holiday. Here in the U.S. Christmas began showing up commercially way back around the time of Halloween. Retailers unpacked their Christmas stock, to what many is considered way too early, and each year it comes out earlier and earlier, so that customers can decorate early and check presents off of their lists. Although Christmas seems to have morphed into a season of materialism it still offers a time of giving to those in need.

This is an old tradition that may even go back to Mary and Joseph being given room in a barn, but at the very least goes back a few hundred years. According to a historical documentary by the BBC, Victorian Farm Christmas,  the Victorians were charitable during the holiday season giving through collections at churches to go to the poor or by giving food directly to those without. Many today continue this tradition of giving at Christmas time, whether it be by dropping change in a red, metal Salvation Army pot, or by making a donation to an organization.

Within my communities I have noticed multiple ways to give this year, such as by donating toys to children without, food to a food cupboard, and yoga classes by donation in which the money raised is given to a specific cause. In fact, I hosted a candlelit Slow Flow earlier in the month that was by donation. Teaching for free or attending a class and donating to a cause is what is classified as karma yoga, or yoga in action. 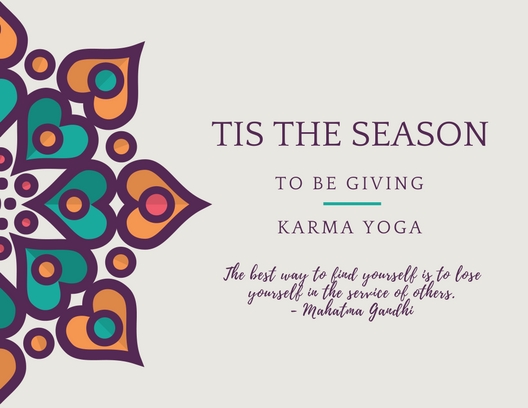 Karma yoga can come in many forms. It might be performing a chore, giving of time or money, or freely sharing yoga with others. Around the winter holidays is a great time to host a karma yoga event or find one to attend. People have it in their hearts to give and it’s cold, so a great time to move towards indoor activities. Of course, however anytime of the year would be a good time for karma yoga, but during the holiday season is a very appropriate time to give.

As a student look for donation classes in your community. If you are a teacher or studio owner, host a class or two by donation and find a local organization that will benefit from the money you raise. It is so easy as a teacher to host a karma yoga class, the skill is already there, and the space if a studio is readily available is there as well, all that is required is organization, promotion, and some time to plan and teach.

May you and yours have a joyful holiday season and may you find ways to give to your community this season and into the new year.