Rana Plaza, located just outside of Dhaka, Bangladesh was an eight story building that collapsed due to poor construction and lack of maintenance on April 24, 2013. Thousands of workers were housed within the walls of Rana Plaza and were forced to go to work although there was knowledge of a large crack in a column of the structure that eventually led to the collapse. One thousand-three hundred-thirty four people lost their lives in Rana Plaza and more than two thousand people were injured.

One thousand-three hundred- thirty four (1,134) people lost their lives in Rana Plaza and more than two thousand (2,000) people were injured.

The thousands of laborers worked for very low wages for big-name western companies such as Joe Fresh (Canada,) Carrefour (France,) Primark (UK,) J.C. Penney (U.S.,) and Zara (Spain.) As of this 2014 Forbes article some companies had paid  financial compensation to the families of the deceased, and some had not. Other large companies like Walmart and the Children’s Place (both U.S.) had paid compensation even though they did not house workers in the building at the time of the collapse, but had  at some point in the past. On top of financial compensation, those found responsible for the collapse were charged with murder back in 2015.

Even though such large North American and European clothing manufacturers are

associated with the collapse at Rana Plaza (and countless other collapses and tragedies,) consumers often fall deaf to such news. Personally, I first learned of Rana Plaza a few months after the tragedy via an NPR interview by Terry Gross with author Elizabeth Cline speaking about her highly recommended book on the Fast Fashion industry, “Overdressed: The Shockingly High Cost of Cheap Fashion.”

My shopping habits have changed drastically since hearing that interview and reading the book (I haven’t shopped at or even entered a large clothing chain since summer 2014.) You can read about my lifestyle changes in previous blog posts which outline hosting clothing swaps, a great alternative to supporting Fast Fashion. 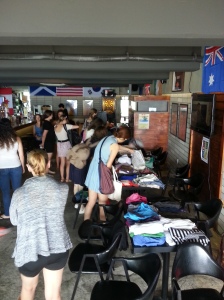 I don’t write this post to be self-righteous or to encourage readers to shift their shopping habits as drastically as I have, but rather to inform consumers, because we are all consumers, of a tragedy that they may not be aware of. The collapse at Rana Plaza happened just three years ago,but I’d bet that many shoppers have never heard of it. You can dig and dig and dig and find many other similar stories of ill-treated, cheaply hired labor in developing countries. Laborers whose stories are not shared enough and who may even sacrifice their lives in poor working conditions for a cheap price tag in a department store. Bangladeshi workers work for a fraction of the cost of other laborers elsewhere and are often forced to work 12 hour days in unsafe conditions. The lives of laborers are the hidden costs of cheap clothing that we blindly consume.

It’s never fun to be the bearer of bad news, and I often feel that I’m a “Debbie Downer” because I share tragic news with friends and readers, but if we never know the truth then we’ll never change our ways, and if we, the consumers never change our spending habits then we’ll never shift the way of production. Whether you decide to go to a second hand shop this weekend instead of a mall or department store, or share this link or story with a friend, every little bit helps and adds up eventually. But we have a lot of sharing and changing to do to defeat the Fast Fashion industry.

Thanks for visiting us @ksgeschke !!! It was a quick one nighter, which just means we'll have to come visit you in CLE soon. #winter #mercyhurst #chq #chautauqualake #julbo #foreverfriends